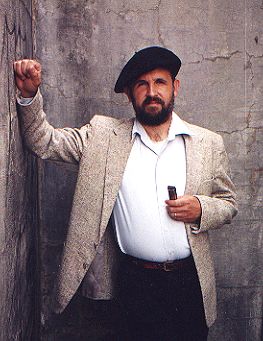 The year was 1953 and Mark Graham was born in the inhospitable no-man’s land between Renton and Seattle, Washington. It was this harsh, unyielding wilderness that nurtured an incipient yet incendiary impulse toward musical satire. Under the unwholesome influence of Homer and Jethro’s classic LP “At the Country Club”, Mark embarked on a perilous and far reaching exploration of corn-fed American country musical humor that was to take an ominous turn toward obscure musical sub genres of even more dubious commercial viability.

Seeking to create a versatile and unique vehicle to comment on what has come to be called “the human condition”, Graham sought to combine the lyrical essence of Tom Lehrer, The Smothers Brothers, Gilbert and Sullivan, the mysterious Dublin balladeer, Zosimus and the Epicurean philosopher-poet, Lucretius and wed them to the barnyard sensibility of old-time music’s Uncle Dave Macon.

While modestly claiming complete and utter artistic success, popular acclaim has remained utterly and completely modest. For although Mr. Graham has performed at such exalted venues as The Newport Folk Festival, The Prairie Home Companion, London’s Festival Hall and Port Townsend’s Upstage Theater and Restaurant, he fortunately retains a deep and abiding interest in classical through rococo pick and shovel technique (with a wheelbarrow minor) and applies the theory and practice in the service of the Burton Water Co. of Vashon Island.

An evening with Mark Graham is a trip to a rip-roaring, old-time slugfest illuminated by great flashes of wit and fascinating insight into “the human condition”.

“An asshole in a giant puppet head”
Rolling Stone

The Kings of Mongrel Folk!!

Mark Graham and Orville Johnson step out of the phone booth (obsolete pop culture reference) in their Kings of Mongrel Folk!!™ outfits, ready to rain down truth, justice, and the Mongrolian way on anyone that dares to set foot in the lovely North City Bistro! All in good fun, with good food, wine, and music to match!!!

The Kings return to the North City bringing merriment and mirth!!! join in!!

The Kings of mongrel folk

Kings Mark and Orville return to the bistro to regale their subjects. Rejoice!!!

Stay in touch with the Kings!